Home | About Us | History of Mount House
Share Page

The location of Mount House is in the Green Belt conservation area, with woodland and vast green spaces that the School can utilise for sports and outdoor teaching.  The location is also on the eastern edge of the Battle of Barnet battlefield, a historic encounter in the Wars of the Roses in 1471. This provides an exciting link for the School to work closely with Barnet museum on local history projects.

The ‘Mount House’ itself is a stunning Grade II-listed fine red brick mansion with many notable architectural features such as the central doorway with Ionic columns and a six-panel door and cantilevered stair with two fluted balusters to each tread, and ramped handrail.  Situated north of Hadley Common, on Camlet Way, Mount House sits to the northeast of a group of Grade II-listed 18th century houses clustered around the Grade II-listed parish church of St Mary the Virgin.

There is little available documentary evidence relating to the architect, original design, or early development of Mount House. Nevertheless, it is generally thought to have been built in the early 18th century, in a Palladian style, as an article in Country Life contended in 1942: ‘The original design must have been a perfect example of the smaller Georgian house and may well be due to such a scholar as Ware or Flitcroft.’ It was built on ground enclosed from Enfield Chase, and remained within Enfield parish until 1882.

As a family home, the most famous resident of ‘Mount House’ was Joseph Henry Green (1791-1863), an English surgeon who became the literary executor of Samuel Taylor Coleridge.  Green lived at Mount House between 1836-1863 and was one of the most eminent surgeons in England at the time and also close friends of Samuel Taylor Coleridge from their first meeting in 1817.  When Coleridge died in 1834, he made a huge tribute to their friendship by naming Green as the literary executor in his will, making him responsible for all his manuscripts, books and literary legacy. Green gave up his private practice at Lincoln’s Inn, and moved to Mount House where he lived for the rest of his life and wrote Spiritual Philosophy; founded on the teachings of the late Samuel Taylor Coleridge.

In wartime Britain, the educational role of Mount House began when it was commissioned as the home of the Architectural Association School between 1940-45.  At the end of the war there was a renewed focus on education and the building was confirmed to retain its sole purpose of the education of children and was established as St Martha’s Senior School for girls (1947-2017). 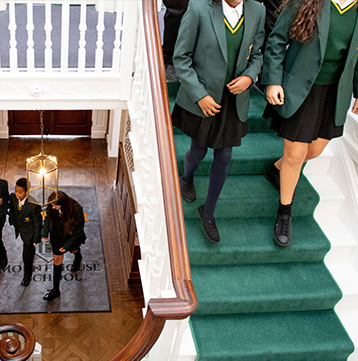 Our Values
Our commitment to character education ensures teachers and students work collaboratively in an atmosphere of mutual respect. More