A very warm welcome back to school – and a particularly warm welcome to those of you who are physically back in school for the first time since the country went into “lockdown”  – probably about 3 months ago.

All year groups have been doing exams in the last 2 weeks since the half term break, and I hope that you all feel that you were given a good opportunity to show your teachers what you have learned in the last year. The time immediately after end of year exams is a particularly worthwhile learning experience. The exams have identified what you don’t know, and your teachers will be recommending what you need to do to fill in the gaps in your learning. It is really important that you use this time wisely to consolidate and prepare for your work next year, in the sure knowledge that whatever comes your way will be even more demanding and rigorous , and that whatever you have learned this year will be a springboard to success next year .

If ever you have been out for a walk in the dark, You have probably noticed that your eyes quickly acclimatise to the absence of light and that it is amazing how much you are able to see. We have all been affected by the darkness of COVID 19, and I wonder what we are able to see more clearly as a result of the darkness of the last few months.

All of us have been affected. We have all been unable to see loved ones, elderly relatives who might feel alone and frightened, those who have suffered with the illness, or those who have died.

But we now have an opportunity to consider exactly what parts of “normal” we wish to return to. The world may never be the same again – but this may be a good thing. We are able to consider if we really want all of our paracetamol to be made in India and our PPE in China. Is it not madness not to be making our own so that we never again have to compete for scarce and vital supplies? This country has been at the mercy of long distance supply chains and we are now all painfully aware of the price we have had to pay for cheap foreign merchandise.

During lockdown we learned how to make things again, from baking bread to the Mercedes Formula 1 team producing in double quick time a breathing device. Everywhere you looked, creativity and ingenuity were  thriving. If there is one thing I hope we have all learnt from the past months it is that the UK as a country must become more self- sufficient – even if we have to pay more for the eventual product.

Millions of people around the country decided to use local shops instead of big supermarkets which were considered too dangerous. I personally did, and I am proud to say I cooked more in the last few months that I have done in the last 20 years.

I have spent nothing on clothes, nothing on leisure or entertainment, nothing on eating out and only quite a lot on food to eat at home.

Of course I missed going to get my hair cut, but this pandemic has highlighted what is really important and what is not. In the final analysis, food, shelter and love are probably all we need.

Lockdown has also caused a reversal of traditional social hierarchies – basically who is cool and who is not. Filmstars attracted derision if they tried to give advice about the virus based on roles in films they had played (for example Kate Winslett who played an epidemiologist in the film Contagion). Instead it is good to see that people of genuine substance like the Chief Medical Officer Chris Whitty are getting more airtime and the plaudits they rightly deserve. Who would want to argue against the publicity afforded to the real character of Colonel Sir Tom Moore – now 100 years old. Three months ago he was an unknighted former Captain.

The Roman Philosopher Cicero once said “In nothing do men more nearly approach the gods than in giving health to men“. How good it is to see our medics and care workers all over the UK joining the immortals as we applaud them every Thursday evening. Society has at last remembered who its key workers really are. Instead of seeking mindless and often tawdry fame for fames sake, I really hope we will continue to applaud and indeed reward, those who do things of real and lasting merit to help their fellow human beings.

All of us have had to learn on the job. As I have said in the past change is the new constant and we will all have to continue to learn throughout our lives to keep up with it. You certainly have learned a lot  nd so have I.  I had never been on Microsoft Teams or Zoom and now I do it every day – including now.  Things have changed in the workplace, and as the Chief Executive of Barclays suggested – having thousands of workers in one building may well be a thing of the past. It is conceivable that London itself might lose its lustre as the place to work.

I hope very much you have all noticed an unfamiliar noise in lockdown. This is the sound of silence. It was the hush of a car less world, interrupted only by the sweetness of birdsong. The sun has been shining for two whole months in a pollution light sky with no airplane trails to disturb our tranquility. Wildlife has flourished, and Countryfile has come to our towns and cities. Those of you with asthma might have noticed you can breathe more easily.

Covid-19 has undoubtedly led to a breakdown of barriers between young and old as we have all enjoyed catching up with old friends and family. Many of you will have helped your grandparents unravel the mystery of Zoom as over 60% of elderly people said they felt more loved and cared for by relatives than ever. Well done to all of you for that. An impressive three quarters of a million people signed up as volunteers for the NHS. Communities came together to look after their most vulnerable. We must not lose this as we emerge from the dark times.

When you look back on this year, with the benefit of hindsight, I hope you remember that being forced to keep our distance brought us all closer together. Covid came and Covid will pass, and what will survive is love. 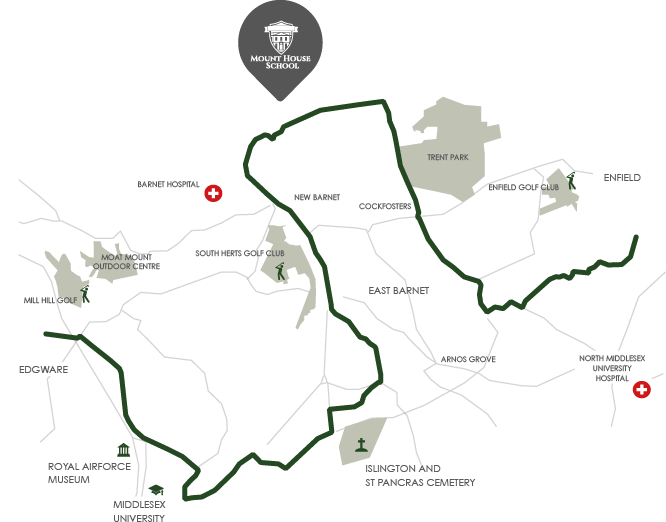 Get in Touch
Get Directions
This site uses cookies: Find out more.